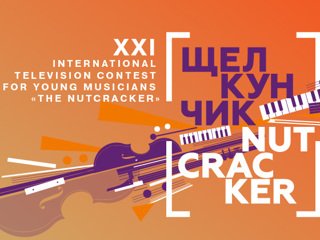 21th International Television Contest for Young Musicians 'The Nutcracker' will be held in Moscow from 1 to 8 December 2020.

Applications are accepted until October 05, 2020.

One of the most cherished projects of the RUSSIA-KULTURA Television Channel, each year the 'Nutcracker' contest unravels new and exciting talents from all over the world and provides young performers with opportunity to showcase their skills on a professional level, as well as exchange experiential knowledge and receive the judgement of eminent professionals.

The ‘Nutcracker’ has earned the reputation as one of the most prestigious music contests for children in Russia. It enjoys close attention of a wide and diverse audience, from professionals to classical music enthusiasts.

The contestants perform in front of many millions of viewers, as the auditions are both televised and streamed live on the channel’s website. This means that the participation in ‘Nutcracker’ is an inspiring opportunity for young performers to step into spotlight. Besides, finalists are honoured to perform at one of the most prestigious Moscow venues – the Tchaikovsky Concert Hall – with a symphony orchestra accompaniment.

On April 25, 2016 the International Television Contest for Young Musicians 'The Nutcracker' became a member of the European Union of Music Competitions for Youth (EMCY).

REGULATIONS OF THE INTERNATIONAL TV CONTEST FOR YOUNG MUSICIANS «THE NUTCRACKER»->>>