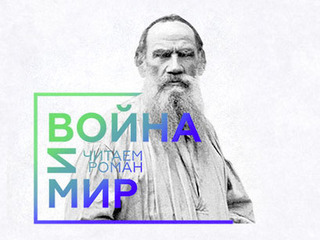 Russia on Tuesday began a 60-hour marathon broadcast during which celebrities and members of the public will read aloud the whole of Leo Tolstoy’s sprawling novel “War and Peace.”

A total of 1,300 readers including actors, politicians and sports figures and ordinary people are taking part in the reading which began at 10 am (0700 GMT).

The reading of the four-volume novel set during Napoleon’s 1812 invasion of Russia is being broadcast live on national television and radio as well as on a special website, voinaimir.com.

“Tolstoy draws together our whole country, no less than the state border or our single currency,” said television presenter Fyokla Tolstaya, the novelist’s great-great-granddaughter, speaking to RIA Novosti news agency.

Mayak radio station, which has given up all its schedule to the novel except for short news broadcasts, urged listeners to stop whatever they were doing and phone in to talk about their favourite character.

“My favourite character is Natasha Rostova, because like me, she made her own journey from a thoughtless young girl to a mother of a family who has learnt how to be happy,” said one listener, 35-year-old Anastasia, referring to one of the novel’s main heroines.

The readings are taking place in some of the settings of the novel, including Tolstoy’s country estate in Yasnaya Polyana south of Moscow, as well as in cities across the country including Grozny in Chechnya.

The marathon reading is set to run till Friday, getting through one volume per day. The project is part of a Year of Literature being held in Russia.

With its multiple characters, lengthy battle scenes and reams of dialogue in French, Tolstoy’s novel completed in 1869 is one of the most challenging in world literature.

Nevertheless the book is considered so vital to Russian national identity that it is compulsory on the school curriculum.
Many Russians are also familiar with the Sergei Bondarchuk’s Soviet film version that won an Oscar in 1969.

The BBC is making a new television series of War and Peace set to air in January, starring Paul Dano and Lily James and written by Andrew Davies. Some of the filming took place in Russia.