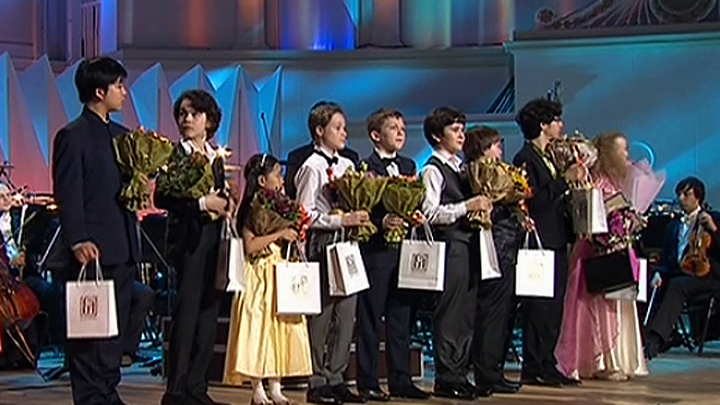 The ‘Nutcracker’ has unsurprisingly become one of the most important musical events of these days and a gift for young musicians from various countries. Winning its prize was a cherished dream for all of the participants. This international TV-Contest is a unique project that gives young musicians a chance to test their skills on the big stage.

The closing ceremony of the ‘Nutcracker’ was both a festive and a worrying event for the contestants. Aged from 9 to 13, the previous week was not easy for them as they hardly had any breaks from rehearsing and giving performances. Yesterday was the last try – all the participants knew they have already become Prize Winners, but still they fought hard for the golden ‘Nutcracker’. Their performances were accompanied by the orchestra.

The third round was opened by the ‘Stringed instruments’ category. The youngest performer in this category is 9-year-old Leia Zhu from Great Britain. She has conquered the minds and the hearts of the Adjudicators right from the beginning of the Contest. She always says that she is not worried before the performance, because playing in front of the audience brings her the sense of delight and fulfillment. Right before her performance, she was singing her favourite songs.

‘I like this stage, the big Concert Hall, the audience. Everything is so nice that I am not thinking about victory at all’, confessed Leia. So, finally, the golden ‘Nutcracker’ for the ‘Stings’ was awarded to the participant from Great Britain. However, choosing the winner in the ‘Piano’ category was highly difficult for the Juries as all the finalists were highly skilled.

‘The Contest gives an opportunity to glance at the future. I follow the development of the participants after the Competition, watch them grow and perfect themselves in the profession’, Ekaterina Mechetina, one of the Adjudicators, says.

It was very loud in the dressing room for the participants even during the performances. Some used every opportunity to rehearse. Maxim Lando tried every piano in the Tchaikovsky Concert Hall. He even went to the crush-room to play the instrument. The golden ‘Nutcracker’ rewarded his tireless efforts.

‘Honestly speaking, I wasn't worried during the Competition. I was longing for this opportunity so much, that when I finally got here, I just used a chance to enjoy my time here as much as I can. Therefore, I walked around the city, went to see the Kremlin and made numerous photos although it wasn't allowed to. So, please, keep it in secret’, he says.

Timofei Yakhnov, winner in the category ‘Wind and Percussion Instruments’, has made a long way to success. He applied for the Contest last year but did not get through to the final. This year he won the 1st prize. ‘I participated again this year, because I wanted to prove that I can make it to the end’, says Timofei.

The musical programme of the final was very sophisticated as the participants aimed to show their best. Every contestant had a support team made up of relatives and teachers. The support of the spectators was also very important for the young musicians.

Varvara Kutuzova won the Audience Choice Award, bestowed by Sergei Shumakov, editor-in-chief of the Russia-Kultura TV-Channel. ‘This Contest has given us hope. As these children are the hope for our culture’, Sergei Shumakov remarked.

This year is again witnessing nine winners – three bronze, three silver and three golden ‘Nutcrackers’. More importantly, before the New Year 2016 all these young princes and princesses have experienced a real fairytale, not the one by Hoffmann, but that in the world of music.